Decided to sketch Binondo Church again as I am not so happy with the finished work the first time I sketched it.

Posted by Unknown at 6:50 PM No comments:


After looking around Fort Santiago for interesting subjects to draw, I decided to settle in a shady spot, from which a number of kalesas (horse drawn carriage) were visible, to shelter myself from the scorching heat.  When I showed the finished sketch to a friend, she thought that the kalesa was drawn out of my imagination as it resembles the pumpkin carriage ridden by Cinderella to the ball.  But the kalesa is a real one, and I guessed, was designed as such to attract tourists.  What really caught my attention was the shadow made by the foliage on the ground.

Unexpectedly, bird poop fell on my wrist and on the sketch after having just finished my sketch.  Can you locate the exact spot where the bird poop landed on my sketch?

My Collection of Coca Cola Tin Can 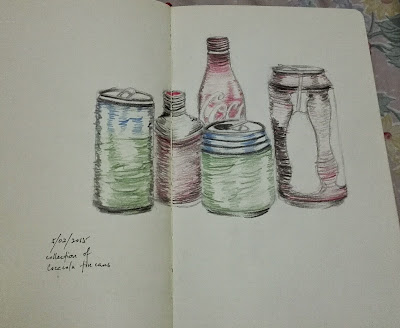 I began collecting Coca Cola tin cans when I saw piles of distinctly shaped Coca Cola cans  (second from the left) in a supermarket in Taiwan back in 2008.  I am not a fan of softdrinks but I so wanted to own one of those cans that I grabbed one to the cashier.  Now, there are five in my collection.
Posted by Unknown at 10:02 PM No comments:

After climbing the first flight of stairs leading to Wong Tai Sin Temple's main altar, I was greeted by human-sized statues of the twelve Chinese zodiac signs.  I walked past tourists busy looking for their own zodiac signs to take photos with them, and continued to the next flight of stairs.  The main altar came into view, before which devoted worshippers silently communicated their prayers.  This scene was made even livelier by the red and yellow lanterns hanging above the courtyard.  I then directed my attention to the surroundings.  The columns on both sides of the courtyard immediately caught my attention because of their intricate dragon carvings.  I made a sketch of one of the columns as shown in the photo below.


The temple is so spacious that it even houses a garden named Good Wish Garden.  Pavillions of different height levels, connected by walkways traversing a pond, are built to allow visitors to view the garden from different angles.

The temple is definitely worth a visit.  Plus, it is conveniently located just outside Wong Tai Sin MTR Station.

I really love the color pattern exhibited in this building along Paterson Street, Causeway Bay , Hong Kong: the diagonals of bright red and orange squares against the white background made the structure very visible. 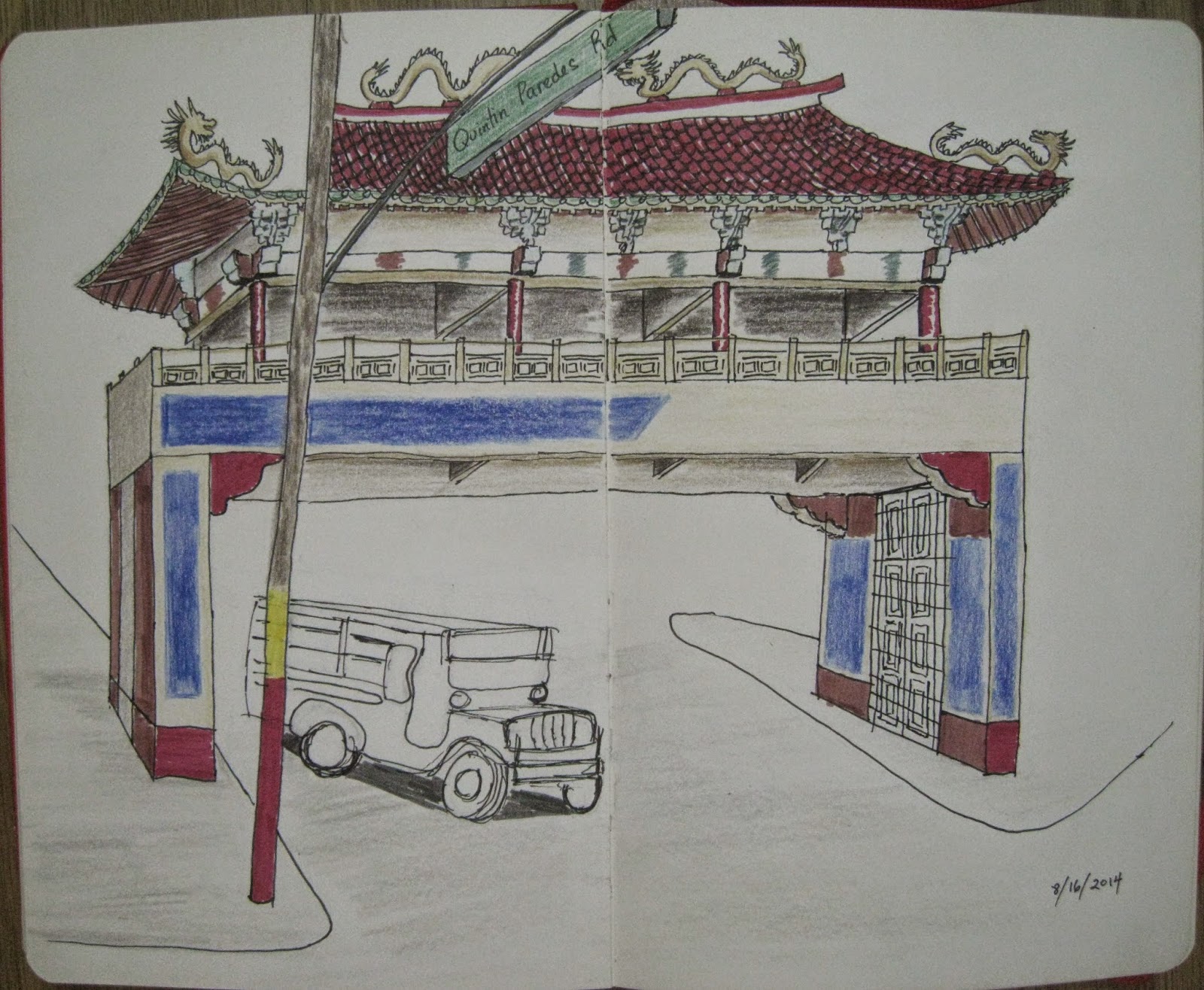 I was inside 7-11, enjoying a bottle of Minute Maid, when I sketched the Filipino-Chinese Friendship Arch.  The passing vehicles were the most difficult to draw.  I need to be fast enough in sketching the vehicles before the stoplight gives them a go signal.  Sadly, I was not fast enough.  Long before I finish a sketch of one vehicle, all vehicles would continue to their respective destinations and be gone in a second.  I cannot remember how many vehicles had passed before I was finally able to draw the jeepney you can see in the above sketch.
Posted by Unknown at 10:23 PM 1 comment:

The Bund at Night, Shanghai

Walking along the Bund was a pleasurable experience.  It felt like being in two places at once because of the contrast in the sights of the two sides of Huangpu River.  Facing Huangpu River, Shanghai's skyscrapers, including the iconic Oriental Pearl Tower, come into view.  Turn to the other side and go back in time with the sight of historic structures.  Once the sun is out, lights are turned on to bring everything to life, offering quite a different, yet equally dazzling sight, from what is seen at daytime.

I chose to sketch one of the historic buildings along the Bund, the Customs House, at night.  One trivia I learned from the audio guide we rented while inside Oriental Pearl Tower is that the clock on the Customs House is the largest one in Asia.  Anyway, this was my first time to sketch at night.  I thought the experience would not differ so much from daytime sketching, but I was wrong.  I could not see the color of my pencils and had to look closely at the color labels for me to recognize the colors.

The lights made the structure really attractive that I became determined to capture it in my sketch even though I was feeling lazy.
Posted by Unknown at 10:41 PM No comments: